The Kingdom of Bahrain is an Arab island nation strategically located in the Persian Gulf. Its official religion is Islam, and although Arabic is the official language, English is widely spoken too. Bahrain’s population is around 1.5 million, over half of whom are expatriates.

Bahrain is business-friendly and has a small but prosperous economy, ranking 23rd in the World Bank’s 2020 Ease of Doing Business report. See: http://www.doingbusiness.org/en/data/exploreeconomies/bahrain for further information. Bahrain remains the most important commercial and financial centre in the Gulf, although it faces growing competition from the United Arab Emirates (UAE).

The Heritage Foundation’s 2019 Index of Economic Freedom ranked Bahrain 5th amongst 14 countries in the Middle East and North Africa (MENA) region, with an overall score above the regional and world averages. See: https://www.heritage.org/index/country/bahrain for further information.

In addition to providing the benefit of a stable rule of law and a developed market, Bahrain provides strong commercial opportunities for British businesses across many sectors and is also a good starting point for entering other GCC markets, as well as the wider MENA region.

The Kingdom of Bahrain, a small island country in the Persian Gulf, has direct access to its largest neighbour, Saudi Arabia, via the 25 km-long King Fahd Causeway to the west. To the east of Bahrain lies the Qatar peninsula.

Although only slightly larger than the island of Singapore, the state consists of two separate groups of islands, approximately 50 km from north to south and 15 km from east to west, with the main island of Bahrain accounting for around 85% of the total land area.

The central region of the main island is mostly barren and rocky, rising to around 130 m above sea level. The south and west of the island consists of bleak sandy plains and salt marshes, whereas the north and northwest contain many springs and wells, creating fertile soil, many vegetable gardens and verdant groves of date palms, for which Bahrain is renowned.

Al-Muharraq is the second-largest city in Bahrain, located on a small island to the northeast of the main island, to which it is joined by a causeway. The city is a stark contrast to the modern development of Manama, consisting of many densely settled, narrow winding streets.

Summer temperatures are humid and often exceed 35°C, particularly during July and August – and on rare occasions, even up to 50°C. Winter months, from December to March, are cooler, with temperatures around 21°C. There are, on average, only about ten days of rain a year, all during the winter. 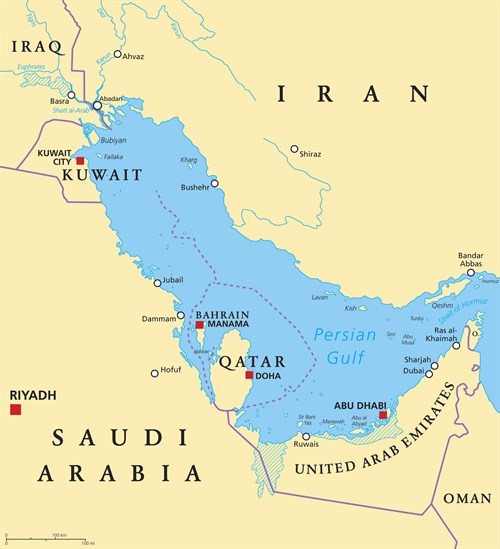 Since the accession of Sheikh Hamad bin Isa Al-Khalifa to the Bahraini throne in 1999, steps towards democratisation and political reform have transformed Bahrain from an absolute monarchy into a constitutional monarchy with an elected National Assembly.

Alongside this reformist programme, greater emphasis has been placed upon enshrining the ‘Rule of Law’ and the individual liberty of people before the law into the Bahraini Constitution. A summary of these rights in relation to the Constitution can be found on the Bahraini Ministry of Foreign Affairs website: https://www.mofa.gov.bh/AboutBahrain/RuleofLaw/tabid/125/language/en-US/Default.aspx.

The passing of Bahrain’s Constitution established a bicameral parliament – comprising of a National Assembly with both an upper appointed chamber and lower elected chamber known as the Nuwab – and restored elections which regularly take place every four years.

Since 2002, women have been granted equal citizenship and voting rights to men, although it remains the case that women are underrepresented within Bahrain’s democratic institutions.

The King of Bahrain reserves the right to amend the Kingdom’s Constitution and has therefore been heralded for the period of top-down legal reform which Bahrain has experienced over the last two decades.

However, following political protests in 2011 and a subsequent period of civil unrest emanating from dissatisfied anti-government groups, the Bahraini Government has increasingly sought to place restrictions upon these protesters on the grounds that they incite violence. Consequently, the main opposition groups – the Shiite Al-Wefaq and the secular Wa’ad – had both been barred from fielding candidates in the most recent elections in 2018. These developments have received both international and domestic scrutiny in terms of the legitimacy and outcome of the vote.

More details of the security status and up-to-date information on the emerging political situation in Bahrain can be found on both the FCO’s travel advice page for Bahrain at: https://www.gov.uk/foreign-travel-advice/bahrain and the British Embassy Manama webpages: https://www.gov.uk/world/bahrain.

As a replacement and update to the previous 1976 labour laws, the King of Bahrain issued a new labour law in 2012 which aligns Bahrain’s legislation with other fellow Arab states and the international treaty obligations to which Bahrain is a signatory. Details of these modifications to labour law may be found on Bahrain’s Labour Market Regulatory Authority webpage: http://lmra.bh/portal/en/page/show/199.

These laws grant employees a more extensive set of rights than before, in recognition of the need to: improve the minimum standard of working conditions; provide clear contractual terms for domestic employees; expand entitlements to annual leave, sick leave and maternity leave; and to prevent discrimination on the grounds of sex, ethnicity, origin or beliefs.

As of 2017, the previous kafala sponsorship system, which governed the regulations requiring the sponsorship of foreign labourers in Bahrain, was replaced by a Flexi Permit. This is a two-year permit allowing eligible workers to participate in Bahrain’s labour market without the need for an employer to sponsor them.

More information and advice regarding how these changes may impact labour legislation, and how this permit applies in individual instances involving expatriates, may be found on Bahrain’s Labour Market Regulatory Authority website: http://lmra.bh/portal/en/page/show/325.

Bahrain has the most diversified economy in the Gulf Cooperation Council (GCC) and is slowly moving away from dependence on oil and gas, with steady growth over the past decade. Bahrain has strong economic ties to the wider GCC, especially Saudi Arabia, which is also a key source of tourism. In 2018, Bahrain recorded a real GDP growth of 1.8%.

According to the Heritage Foundation’s 2019 Index of Economic Freedom, Bahrain continues to be affected by political unrest following the Arab Spring in 2011, driven by long-standing complaints of the country’s Shia majority. Rising global oil prices should help the government reduce the budgetary deficit, but persistent social unrest and intermittent political violence add pressure to maintain higher public spending.

Bahrain has grown steadily over the past few years and the economic outlook remains largely positive. Bahrain’s gross domestic product (GDP) grew by 1.8% in 2019.

The government has an increased focus on economic diversification as part of the Bahrain Economic Vision 2030 goals, with aims to enhance private sector growth and reduce reliance on oil and gas.

For further information on the Economic Vision 2030 see the Ministry of Industry, Commerce and Tourism (MOIC) site at: http://www.moic.gov.bh/en/Ministry/bahrain-economic-vision-2030.

Bahrain is undergoing a surge in infrastructure development following allocation of funds from the GCC Development Programme to improve public services and address socio-economic issues.

Main contributors to GDP besides oil and gas are:

Further areas for growth include:

Bahrain is a member of the Greater Arab Free Trade Area (GAFTA), which gives it duty-free access throughout all GAFTA states.

Bahrain has free trade agreements with:

The bilateral relationship between the Kingdom of Bahrain and the UK is strong and long standing, with the bicentenary marked in 2016.

Many senior Bahraini business and political figures were educated in the UK, and consider the UK their second home. These strong business ties between both countries create a strong appetite for continued bilateral trade and investment.

Given its strategic position as a major trading hub in the region, Bahrain is an important partner and base for UK companies in the Gulf, and there are over 500 active UK commercial agencies and over 90 branches of British companies in Bahrain. In addition, over 350 Bahraini companies have UK partners.

Bahrain is now one of the UK’s largest export markets in the GCC, receiving £439 million of goods plus £228 million of services from the UK in 2018.

The top five UK exports to Bahrain were:

There are a number of reasons to choose Bahrain as an export destination:

Strengths of the market

Strengths of the Bahraini market include:

Contact a DIT Export Adviser at: https://www.great.gov.uk/contact/triage/location/ for a free consultation if you are interested in exporting to Bahrain.